"Carry On Up The Kinder" or The Edale MMM

Early start and pick up Dave Motley to get down to Edale for around 8:00 am. Some bad omens as we get lost driving down or were we just half asleep? All's well as we get registered and start for about 9:00, Dave probably going 10 minutes before me.

Dib, get my map and set off planning as I jogged up the lane towards Edale village. I've only been here once before so it's a little understandable when I run into the car park of some sort of outdoor centre; looked a bit of an idiot but never mind. Run back out on to the lane. I had looked at the map carefully before hand so I had an idea of the way I'd do this checkpoints. One bunch to the west seem to be better to bag at the end if time allows as they're slightly isolated. I'd go anti clockwise right round towards the back of Kinder near the A66 and then come back and decide which to pick up towards the end.

All went well with just a few problems and slower legs. I did find it difficult to maintain map to ground contact at times when I was crossing very rough ground and the absence of any local knowledge beyond one Skyline rec was both difficult and more exciting. My biggest mistake was after over 3 hours by choosing to go west steadily traversing up toward the edge to the north of Grindsbook Clough instead of climbing up on to the edge and just running along it. Although it lost me little time it was so difficult under foot and so tiring I didn't plan my next leg properly and that cost me a few minutes. It also meant that my finish had to be absolutely flat out, descending 1100" and running like a lunatic through the village to not go over 4 hours and 5 minutes and start incurring double penalties. I made it by 5 seconds.

Dave appeared and asked if I'd moved the keys hidden on the car tyre, not very secretively. No I hadn't but they'll turn up, I thought! 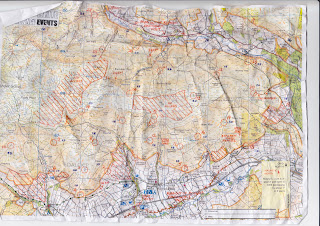 Once I'd downloaded I realised I was in the lead, at the time! This didn't cheer Dave up, he's a bit selfish sometimes! Anyway after he got a lift up to Lancashire got my keys and came back and I'd stood around for 4 hours trying to keep warm we did get into the car. The wife was very unimpressed with having to drive the keys part way down!


Final result was that I came 4th and 1st vet 40. I presume I've taken the series V40 title with 2 class wins. I think that gets me into the Rab MM 2 day event for free next year. Might have to take this seriously!
Posted by FellTup at 03:14 No comments:

Didn't want to go overboard preparing for this but I know I'd kick myself if I messed up for want of a bit of simple fore thought. So I've had a few evenings of night nav practice trying to find premarked points then seeing if I hit them. I have to say I got many spectacularly wrong, even running to the wrong checkpoint ( even though I'd marked them) and then trying to convince myself that I was right. I got back into pacing, running the needle which is pretty difficult in the dark! Madge seemed to enjoy it all, although she was a bit puzzled by the erratic routes. I was all good fun and the more I got wrong, the more I learnt. 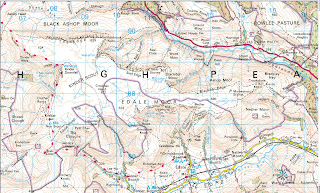 I think given the time that the checkpoints might go right around the back the Kinder Plateau. I can't see us going south but I'm prepared to be surprised.

The main thing on Sunday is to enjoy it and see how it goes!
Posted by FellTup at 04:47 No comments:

November has turned out to be a pretty good month. Only one race and few irregular commitments have seemed to mean that I have actually managed to do what I had vaguely planned out for the month. Lots of running, loads of climb at a reasonable intensity.

We moved house in September and this obviously meant a few missed runs. October was partly about the relays.

November though has been about getting out and really enjoying my running. Ironically we've not been away in the motorhome since the end of August whereas we're normally away a couple of times a month. All this seems to have combined to enable me to run and recover almost endlessly. Although Im not sure about my short race fitness and haven't yet done a cross country this season, I think my longer race fitness is better than it's ever been.

Moving back to Trawden has been a massive coup. Having moved away 10 years ago it feels great to get out on those tops again. I'm running further than I was those days and I'm stretching out into the Pennines. Exploring new routes, I'm getting a couple of runs over 2 hours each week and running twice a day most days. 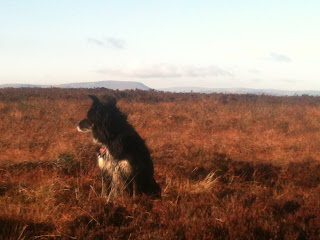 Madge (above) is continuing to be a fantastic training partner, always willing (unless its tipping it down), always fun and pretty much inexhaustible.

December is going to be a bit more varied. I've the next Dark and White MMM down at Edale and I'm going to taper properly for this one. We're away for much of the last week up in the Lakes with walking  and mountain biking as well as Wansfell Race.

January should be a big month with again plenty of miles and climb but some higher intensity stuff starting to appear.
Posted by FellTup at 10:10 No comments:

I liked the look of this a while ago and entered with a real sense of anticipation. It didn't disappoint. I've not done any orienteering for over twenty years and even then it was just divisional sport in the Navy but I am a Mountain Leader and have taught navigation over the years so I was hoping it would all stick together.

I'll get some pictures on if i can find some and flesh it out properly when I've a minute. However, the bottom line is that I ended up being gutted that I didn't win! Not try often that I can say that. I topped the leader board for some time and didn't find out I'd been pipped until the day after. So second overall and first vet.

I made a few howlers with my navigation and think there's still a lot more in the tank so I have something to work with. 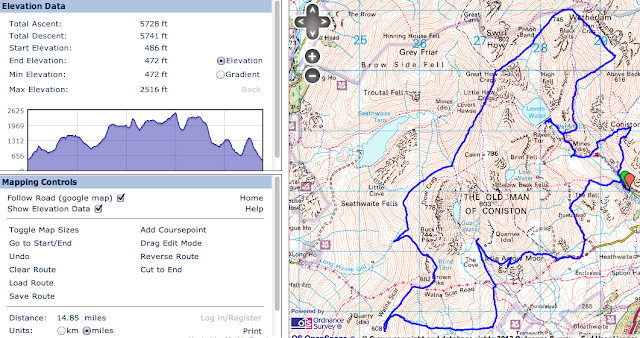 Next one is down in the Peaks in the middle of December. I took a very casual approach up at Coniston, should I do the same with the next one or try and get it spot on? I think I'll enjoy trying my best!

I'm hoping that I can progress enough to do well in the Mountain Trials Classic next but I know there's a step up in terms of the athletic performance.
Posted by FellTup at 12:50 No comments:

This is the sort of run that would have destroyed me a year or two since. Essentially I don't think I used do long training runs hard enough. Last year I was concentrating on track sessions and not enough on sustained running. The gap in between much of my training and my races was enormous, I seemed to get away with that for many short or medium races but struggled very badly on longer stuff.
Yesterday I found I was still strong towards the end of this 20 miler.

It was a beautiful day but pretty cold; this led to much stopping and starting as jacket came on as an icy blast caught us then stripping off when sheltered but bathed in sun. The area is lovely but not quite the mountainous beauty of the Lakes and the like. Navigation was pretty straight forward on the large scale but getting the right trod was tricky. I may very well go down to Hayfield and take another look at the western section.

No pictures I'm afraid as we were on a pretty tight schedule: I had a party to go to and Dave had an appointment at the velodrome. I didn't go to the party, Tracy had been working all day and just wanted to put het feet up, I didn't argue!
Posted by FellTup at 01:17 No comments:

I set off with no expectations at all. Doodling along focusing on the nav and ignoring all around me; in a sociable way!

To cut a long story short I realised by around two thirds of the way in that I was actually going pretty well and should maybe push hard. I missed the last checkpoint with a bit of stable door-itis, loosing a few minutes in the process. I came in fourth and second vet.

Absolutely loved it!
Posted by FellTup at 11:37 No comments: 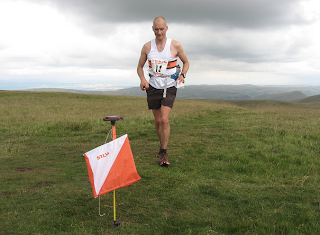 My original intention had been to try and cleverly weave our 2 weeks in Scotland around some great walking, biking and running, concluding with the Ben race. This didn't work out as we needed to be back before that weekend. So i looked for a race and found the Ochil 2000s. An AL race of 20 miles and 5000". That seemed to fit the bill.

Have had a nightmare at Borrowdale a few weeks earlier I needed a fresh approach. I set off very slowly, probably at the sort of speed I'd start a long training run. Absolutely no push at all on a day of sunshine and nice views. Having never stepped onto these hills before in my life and this being a navigation race I wanted to keep a certain focus, I certainly didn't want to follow anyone else, unless........ unless my earlier planned route needed quickly amending, as they sometimes do.

I won't detail all the hills we crossed but I did pick up places steadily and for the most part got the navigation spot on, on two occasions making up quite a few places with she contouring. In the last 4 or 5 miles, with rain now falling, its fair to see I was going pretty much flat out to make up and defend places.  I came in an hour behind Murray Stain and over half an hour behind Yasmin Paris. I was 27th out of 76, to be fair as a counter in a Scottish GP it had a class field at the top.

Did I enjoy it? Certainly. I was happy with my performance, boosting my badly dented confidence. However, I probably wouldn't make the long journey for a very pennine like race.
Posted by FellTup at 11:57 No comments: